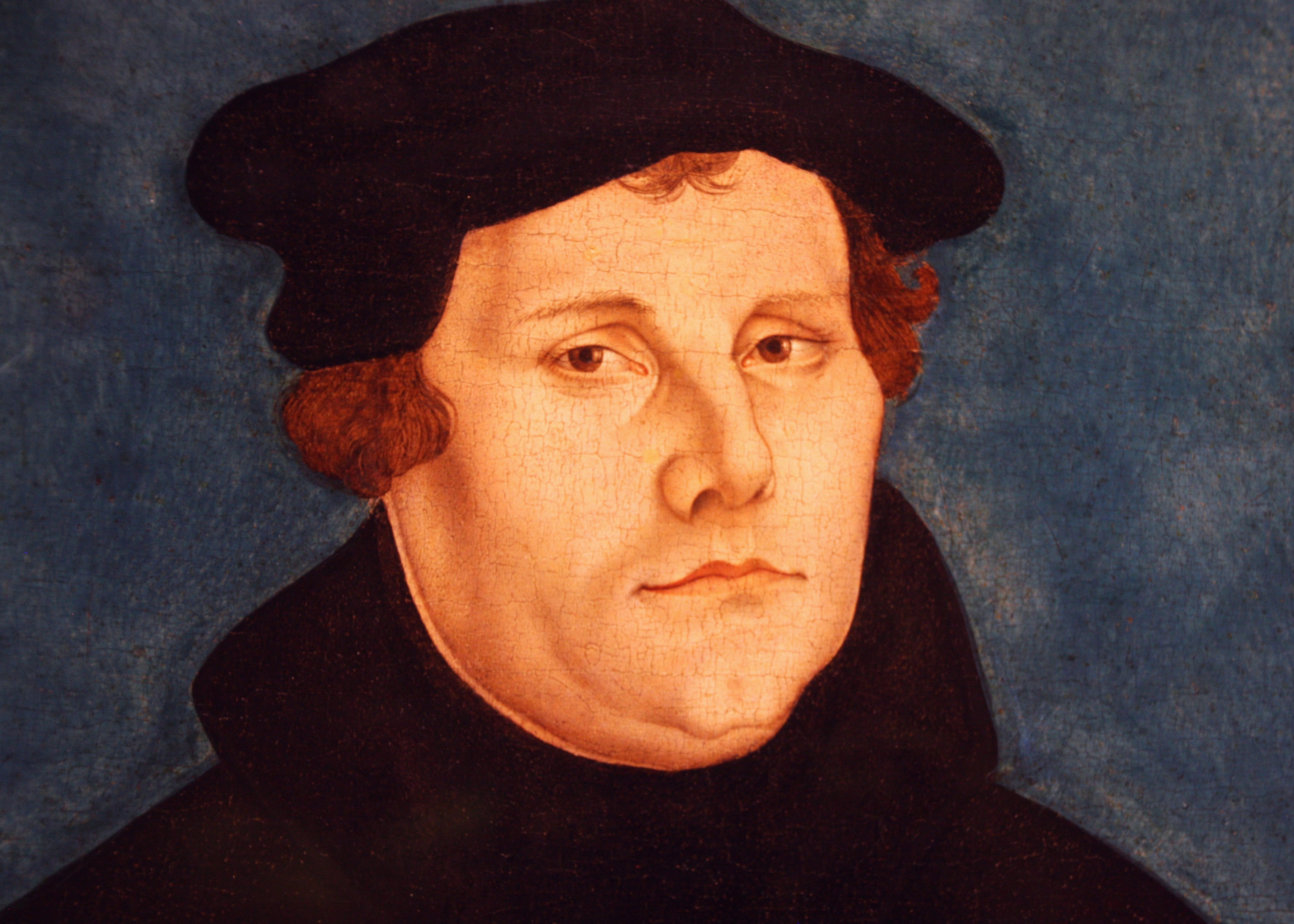 This past week many in the Christian world paused to reflect on the movement begun 500 years ago last October 31 in Wittenberg. Very correctly, many of us paused also, be it with the assistance of the assemblies put on at John Calvin School or at Guido, or perhaps by attending the Reformation Rally hosted at Redeemer College. For my part, I’d like to take a moment today to put this anniversary celebration into the context of what’s happening in today’s North American culture. To do that I intend first to discuss in one paragraph what the Reformation was about, and then consider the significance of today’s Halloween.

Little Martin Luther was raised to think in terms of how to please God. Luther’s parents, and European society in general, well knew from Holy Scripture that the almighty Creator was holy and righteous. So the Church taught the population to be good and do your best, and then God will be pleased with you. That’s how Luther was raised: be good and do your best, and you’ll receive God’s approval.

The problem was that Luther (and many others with him) never felt he was good enough – and that’s a thought every sensitive and honest soul today can relate to. So Luther made a point of afflicting himself as an ongoing reminder to do better, be it in what he did or in what he said or even in what he thought and desired. The need to do better crushed him – as it also crushes us.

The Lord God in his time opened Luther’s eyes to realize that the gospel of Jesus Christ was not at all about sinners finding ways to cozy up to God. Instead, the good news of the gospel is that holy God, in deepest compassion for sinners crushed under the weight of his righteous penalty on sin, went to sinful man himself in order to deliver sinners from bondage to sin and Satan. The Son of God, Jesus Christ, came into our broken world to die on the cross in our place. In the process he atoned for our sins and restored these sinners to God. God in mercy makes these sinners his children. That’s the gospel of grace – redemption through Christ alone. It’s what Paul wrote to the Christians of Rome: the gospel is “the power of God for salvation to everyone who believes, to the Jew first and also to the Greek” (1:16). So the righteous live by faith (v. 17).

The way our culture does Halloween has changed in the years since I grew up. I recall as a child putting on a homemade mask, Dad bundling us kids into the car for the ride to town, and a bunch of us working a section of town for an hour or so in pursuit of tons of candy, potato chips, peanuts and a couple of apples. Yes, there were carved pumpkins around town, and the odd sheet hung in a tree to simulate a ghost, but there was nothing of tombstones or skeletons or spiders’ webs or gore. It was an innocent event, and rather fun. And the loot lasted for weeks.

This is also the time when the public schools I attended began each day with reciting the Lord’s Prayer, and every assembly with reading a portion from the Bible. The people of our country understood that Canada’s heritage was distinctly Christian, and so the Christian faith formed and molded our culture. The stamp of the Great Reformation of 500 years ago was unmistakable.

But in the decades since I left school, Canada (and much of the western world) has consciously let go of its Christian background and embraced paganism instead. I know: claiming an embrace of paganism is saying a lot. But how our culture does Halloween today illustrates the point. For the skeletons and tombstones and gore have a history.

Centuries ago the pagan Celtic tribes of today’s Ireland considered October 31 as the last day of their year. They celebrated that event with a festival known as Samhain (pronounced sow-een). At the heart of this Samhain festival was the notion that on this day the realm of the living came the closest to the realm of the dead (witness the leaves falling from the trees, the crops in the field dying, etc). So close did the one realm come to the other, these Celts believed, that the living could now communicate with the dead, and the dead could even cross over into the realm of the living again – not as raised people but as deceased people now coming back to take vengeance on those who wronged them while they were still alive. Druids (the priests) played a role in helping the living to appease the fearsome dead. The vengeance the dead pursued was the trick, while the treat was what you needed to do to prevent the returned dead from doing worse things to you.

With the coming of the gospel to the Celts, the heathen element of the Samhain celebrations receded or even disappeared. Irish migrants took the sanitized festival to North America in the 18th and 19th centuries. That’s what’s become the rather innocent Halloween that I recall from my youth. But with the push across North America to be rid of the Bible’s authority in all matters of life, it’s no surprise that the paganism the Christian faith replaced has reappeared. Hence the numerous illusions to death in the way our culture today does Halloween. Halloween is one illustration that we’ve leapfrogged over the Christian period to resurrect the paganism of the past.

Of course, there are several other examples of the restoration of paganism. I think, for example, of the rise of witchcraft; among Young People it’s the fastest growing form of spirituality. Think too of the public’s embrace of feminism and the growing disdain for patriarchy. Ancient peoples, we’re told, observed that nature is loaded with energy. The beach has a constant movement of water, the sun feels warm and so is life giving, rain produces germination and growth, etc. Because this energy is life giving, it’s obviously female. So we do better to replace our (Christian) male-dominated society with a matriarchal structure where women give leadership; that’ll make for much more peace as nations walk in improved synchronism with the rhythm of nature.

The question now is: can we blend the heritage of the Great Reformation with the revival of paganism? The obvious answer is No.

Why not? It’s because the Reformation on the one hand and paganism on the other have such contradictory explanations of what is happening in the world of the invisible, the world you can’t see with your naked eye. Paganism (we’ll stay with Halloween as the example) would have people believe (yes, believe!) that the unseen world is inhabited by the disturbed spirits of the dead seeking to take vengeance on the living for the injustices they suffered while they were yet alive. The Great Reformation would have people believe (yes, believe!) that the almighty Creator inhabits the unseen world, and this God has such compassion on the living that he himself in Jesus Christ entered our world to reconcile sinners to himself. In pagan thinking people need to provide endless treats (sacrifices) to the spirits in the unseen world, lest those spirits (be they of the departed, be they of the deities) somehow enter our world to haunt us; the unseen world, then, is to be feared. In Reformational thinking people may embrace the good news that God has become our Father in Jesus Christ and so supplies all our needs (and does so in perfect wisdom) so that we need never be afraid of him. It’s the glorious gospel the Lord himself has revealed in his Word.

That’s the bottom line. There is undeniably an energy in this world, and it comes from somewhere. Is its source a force to be feared, one that we need to appease through our sacrifices and treats lest he/she/they/it haunt us or crush us through its tricks, or is its source to be adored because he has displayed infinite compassion by giving us his Son to atone for our sins? The answers to those questions depend on which faith you embrace.

Town needs a clear understanding of the choices. If the kids of our streets see church people participating in Halloween, they’re not going to think of the innocent cultural thing Halloween was four or five decades ago. Those kids, after all, go to schools and follow a media that denies the message of the Reformation and gives pride of place to resurgent paganism in our culture. It seems to me that we need to be very aware of what people around us are thinking. If we don’t take seriously how they’re actually thinking, we’ll never be able to grasp how they interpret what they see us doing.