Do we Need to go to Church?

Home Blog Posts Do we Need to go to Church? 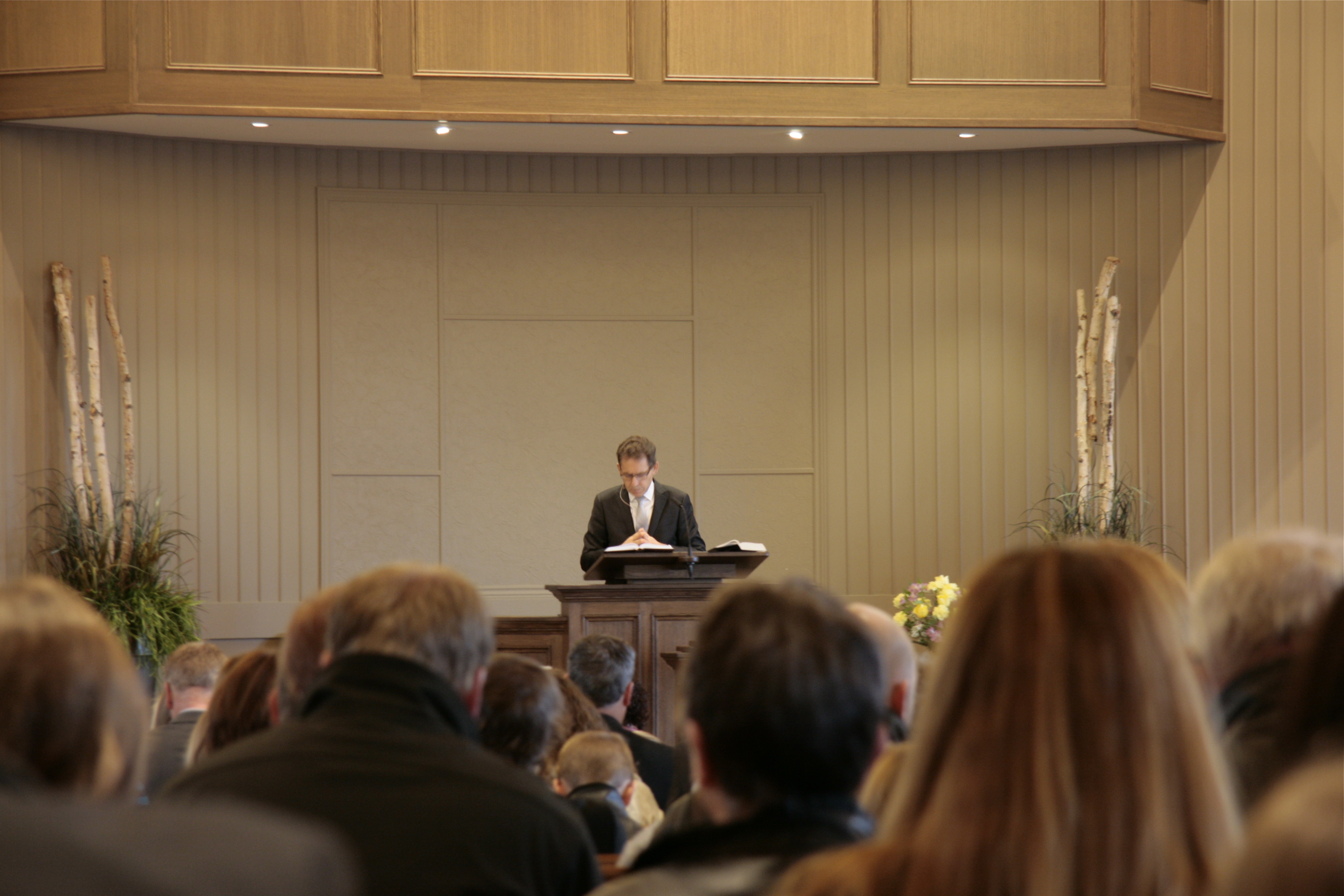 The question atop this Bit to Read may raise an eyebrow among the readers – for the answer is surely so obvious: of course we’re meant to go to church. I agree.

In LD 38 we’ve captured the will of God as revealed in Scripture: “…on the day of rest, I diligently attend the church of God….”

And yet…, I’m going to say that the accurate answer to that question is both Yes and No.  There’s a distinction here that speaks specifically to the restrictions we currently experience.  I’ll try to work this out.

The Lord God instructed his people Israel to treat the Sabbath as a day of “solemn rest, a holy convocation” (Lev 23:3).  The term “convocation” translates the word assembly (see NIV).  The people were to assemble not for a soccer match but for worship; it was a sacred assembly.  Obviously, as long as Israel was in the wilderness the people were to assemble around the tabernacle.  God also specified that additional offerings (= visible preaching of the gospel, with explanation from the Levites, Lev 10:11) were to be sacrificed on the Sabbath.  Once in the Promised Land the people were to gather specifically in whatever place the tabernacle was (Dt 12:5-12).  That place was ultimately Jerusalem, where the temple was constructed.  So the child of God desired to gather with the saints in the presence of the Lord, as illustrated in Ps 84 & Ps 122.

The New Testament saints understood this need to gather together.  The 3000 converted on the day of Pentecost made it their business to “fellowship” “together” (Acts 2:42,44).  The saints in Troas “were gathered together” on the first day of the week (Acts 20:7).  As Paul sought to instruct the Christians of Corinth about right behavior, he referred in passing to “when you come together” (1 Cor 14:26).  In fact, the Greek word translated for us as “church” (the term is ecclesia) actually means “assembly” (see Acts 19:32, 39, 41).  The apostle writing to the Hebrews even instructs his readers to be mindful of “not neglecting to meet together, as is the habit of some” (Heb 10:25).  So the church has understood that it is the will of the Lord that his people actually gather together on the day of rest – and we catch that in LD 38, as quoted above.[1]

Do we need to go to church?  The answer is an unequivocal Yes.

Where, I wonder, does Scripture require that all 600 members of our church in Smithville are to meet Sunday by Sunday at the same place and at the same time?  We all realize that there is nothing Biblically illegitimate for our congregation to meet in two separate buildings of, say, 300 each.  There’s also nothing Scripturally wrong about our 600 members meeting in the same building but at different times – as we currently do with our two morning and two afternoon services.  If that’s the case, why -in principle- can’t we meet in ten services of some 60 people each or 60 services of 10 each, distributed over multiple addresses that may or may not be at the same time?  That’s why I think we’re very hard pressed to say to the authorities that we have to be in church – where “church” is understood as 330 Station Street and “we” is all 600 of us at the same time.

The events described in the book of Acts are quite instructive on this point.  From its small beginning of 120 persons before the outpouring of the Holy Spirit, the church grew in the city to include thousands of persons (3000 in Acts 2:41; 5000 in 4:4; “multiplied greatly” in 6:7).  Yet this group is continually referred to using the singular word “church”, denoting a single gathering (cf 5:11; 8:1,3; cf Gal 1:13).  Once the persecution under Saul broke out and the Christians were scattered throughout Judea, Galilee and Samaria, we suddenly find the plural word “churches” (cf 9:31; cf Gal 1:22).  That is to say: now the believers of necessity assembled in multiple locations.  The persecution in Jerusalem necessitated a different way of ‘doing’ church, in the sense that one assembly became multiple assemblies.  Or to say it differently, the practice of congregating all together was exchanged for the practice of congregating together-in-smaller-numbers.

We look back on these events as recorded in the book of Acts as simply how things were.  Yet for the early Christians and their leaders, this inability to gather together and the need to rethink how to gather in smaller groups was undoubtedly somewhat traumatic; there were difficult adjustments to make in how to do church rightly.

From elsewhere in Scripture it is evident that the early Christians learned the lessons the Lord taught through the persecution instigated by Saul.  Years later the same Saul -now the apostle Paul- wrote a letter “to all those in Rome who are loved by God and called to be saints” (Rom 1:7).  At the end of his letter he gives instructions to extend greetings to Prisca and Aquila and “the church in their house” (16:5).  The fact that Paul mentions several other families in the list of those who were to receive greetings suggests that these families were also assemblies of Christian believers.[2]  From archaeological studies we learn that early Christians did not have separate buildings for worship (“churches” in our language) till somewhere in the 3rd century.  Instead, they commonly met in the homes of the more well-to-do, those who had room for a small crowd.  The story of Eutychus falling out of the window provides an example of the saints gathering in someone’s home (Acts 20:7ff).

So: do we need to go to church?  If by the word ‘church’ we mean the building on 330 Station Street, then No, before God it is not imperative that the church in Smithville assemble at that address.  There is ample biblical warrant for meeting elsewhere than in a particular (large) building of brick-and-mortar custom built for 600 persons to gather for worship.  The whole community around us knows that’s that what we actually believe, for they see us being away for holidays….

If now we define the word “church” as assembly irrespective of size or place, then, Yes, we most certainly are obligated before God to gather together.  Like a body, each member of the church needs other members (1 Cor 12:12ff).  That’s why we confess in the Belgic Confession that “no one ought to withdraw from [this holy assembly and congregation], content to be by himself, no matter what his status or standing may be.”  Instead, “all and everyone are obliged to join it and unite with it” (Art 28).  This is the “fellowship” so priced in Scripture where saints gathered to eat meals together, instruct one another from the Word and pray together (see Acts 2:42).  This is the force of the passage quoted earlier from Heb 10: “And let us consider how to stir up one another to love and good works, not neglecting to meet together, as is the habit of some, but encouraging one another…” (vv. 24f).  This does not need to happen in a megachurch (where the personal connection with another actually is easily missed; ask some of our members!), but can better happen in small(er) groups where each can develop personal relations with another for mutual honesty, accountability and encouragement.

This is also why it pains me to notice that there are addresses in our midst that do Sundays by themselves.  They livestream the services (kudos!) but engage in no fellowship.  I fully understand that the head of each household needs to take responsibility for family health, and I respect the decision each head feels obliged to make.  That does not take away from the fact that the Lord would have his people gather, even in a smallish group, for fellowship and mutual encouragement.  It’s one of the big dangers of today’s COVID realities: some of us learn to be comfortable being by ourselves.

We have been accustomed for years and generations to have churches of numbers way too large to meet in members’ homes.  There’s nothing inherently wrong with that.  So we in Smithville have even torn down an aged church to construct a building large enough to house comfortably our large congregation.  We were comfortable with this way of doing church.

We need now to come to grips with the fact that the Lord our God has reached into our lives with COVID-related instructions from the authorities to limit the size of our gatherings.  For some months we could meet with no more than 5 people in our building.  We’re currently in a situation where we in Smithville can meet with 30% of building capacity.  It is possible (as currently occurs elsewhere in our province and country) that in time to come authorities will limit worship services to a handful or two again.  Though we would be inclined to bemoan such a development and long for a return to ‘normal’, the unanswered question is this: might the Lord have put the restrictions we experience on our path to show us that churches (= gatherings of Christian believers) need not be that big – and need not meet in (what we call) church buildings?  Should we give thought to the smaller-is-better model where neighbors meet in homes?

‘Normal’ could be a long way away….

[1] To be complete I reference also the Church Order where we’ve agreed that “The consistory shall call the congregation together for worship twice on the Lord’s day” (Art 52).