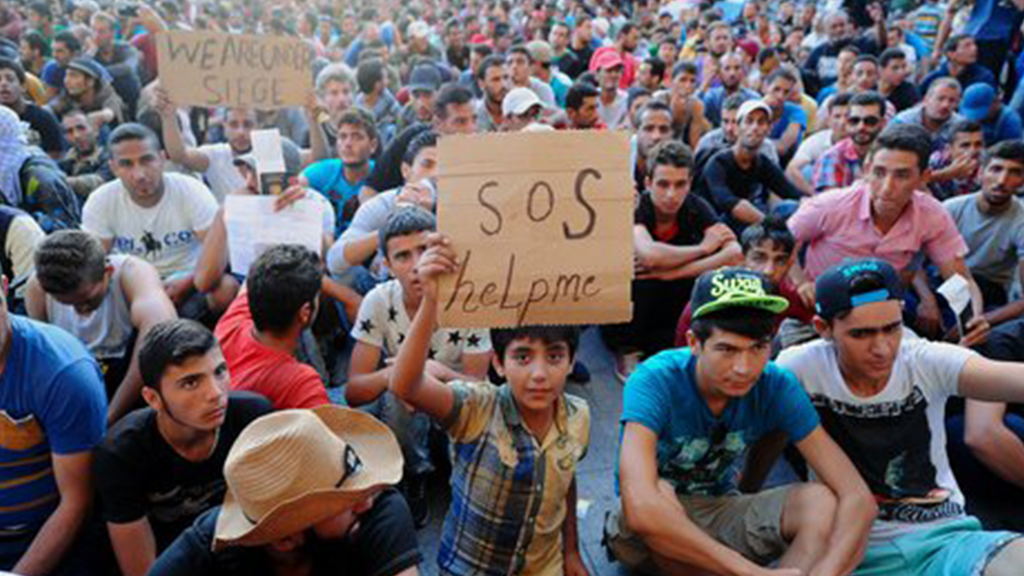 That picture of little Alan Kurdi’s dead body on the beach has focused the world’s attention on the plight of thousands upon thousands of refugees fleeing from the horrors of the Middle East. Media updates, editorials, opinion columns, politicians: all are agreed that something has to be done. As we see the images and hear the details of their suffering, we agree. But we puzzle what we in our little corner of the peninsula could actually do. We’re so little….

Conversations, photos on the fridge, and even general interest demonstrates that there are numerous families and individuals in the congregation who have shouldered responsibility for any number of needy children overseas. These children remain in their own culture, perhaps continue to live with their own families, but through the willing support of overseas beneficiaries these children receive a better chance at getting a good education. I fully suspect that some addresses in our midst go the extra mile to be in touch with the child(ren) for whom they’ve taken responsibility, and so seek to form the child(ren)’s heart. This is certainly reason for gratitude. It costs money and time, and expresses a willingness to share of our abundance to help others in need. I’m thankful that the Lord has worked this grace in our midst.

Such willingness to help comes from deep Biblical roots. Our Lord Jesus Christ gave up the glory of heaven to serve and save folk who actually deserved damnation. While we were his “enemies”, while we were still “ungodly” and “dead in sin” Christ went to the agony of the cross in our place (Romans 5:6-10); how astounding! Back in the Old Testament the Lord illustrated the wonders of this salvation when he adopted slaves in Egypt to be his children, and then majestically delivered them from their bondage. Then he told his people that they were in turn to extend mercy and kindness to strangers precisely because they knew from bitter experience what it was to be oppressed in Egypt (see for example Leviticus 19:34; Deuteronomy 10:19). How much more is it fitting for New Testament Christians to be generous in showing mercy! Paul puts it this way: “Let us not grow weary of doing good, for in due season we will reap, if we do not give up. So then, as we have opportunity, let us do good to everyone, and especially to those who are of the household of faith” (Galatians 6:9,10). We realize: doing good to another, even to strangers, gets to the heart of what the Lord did for us. We want to reflect what God is like.

At the moment there are thousands upon thousands of displaced persons fleeing from the Middle East (to say nothing of other troubled hotspots around the world). John Tory, the mayor of Toronto, has publicly committed himself (with the assistance of some friends) to sponsor a refugee family so that that family can settle in Toronto. Pope Francis has encouraged each Roman Catholic parish to consider sponsoring a refugee family and settling them in their midst. Tory’s example and the Pope’s encouragement are certainly in step with the instructions of Holy Scripture. We, who are so familiar with the gospel of grace, surely understand that.

When I arrived in my previous congregation some 10 years ago, there existed a “Refugee Aid Committee” made up of volunteers from Yarrow and Chilliwack. Through this committee, members of these two congregations sought to sponsor refugees from Africa to settle in the Yarrow/Chilliwack area. To achieve that goal, the committee worked closely with a parallel committee in the Emmanuel Free Reformed Church in Abbotsford because that church “is a Sponsorship Agreement Holder with the Canadian Government to assist in the application process for Christian Refugees desiring to relocate to Canada” (as their website has it). Using data printed in City of Refuge (a Refugee Sponsorship Newsletter; see Smithville Church Social for a copy), the Refugee Aid Committee in Yarrow settled on a particular candidate to sponsor, and then got the wheels in motion to cut through the necessary red tape. Members of the congregation were asked to contribute money to a trust so that the authorities were satisfied that the family concerned would indeed have their needs supplied while they got themselves settled in their new land. Once migration clearance was obtained, members in the congregation rented a house, donated furniture, stocked the pantry, etc. In due time, a Sudanese family cleared the hurdles and arrived in Yarrow. This family knew minimal English, had never driven a car, and knew nothing about computers. They were Christians, but no one knew from which church background they hailed. With the assistance of a translator from the Chilliwack community, rapport was established between select persons in the congregation and this family (under the care of the Committee), a suitable job was located for the man of the house, English-as-SecondLanguage classes were arranged for both adults, transportation organized (how do you take a bus?!). Once a modicum of English was mastered Catechism instruction was organized, a drivers’ license was pursued, etc. Obviously, it was all very time consuming for particular volunteers. But equally obvious, it was also very enriching for these volunteers. As this family became increasingly self-sufficient, the Refugee Aid Committee sponsored another family, and this past summer I met a third family the committee has sponsored since our move to Smithville. These families are deeply grateful for the help received. I should add that other Canadian Reformed Churches in the Fraser Valley do the same sort of thing.

To my knowledge only a couple Canadian Reformed Churches on Ontario have sponsored a refugee family to come to Canada, and none of those are in the Niagara region. I have no idea why there is a difference on this point between the churches of Ontario and of British Columbia, and I suppose the reason doesn’t really matter. Perhaps the developments in the Middle East as the news relates them is sufficient catalyst now for us in our corner of God’s world to consider the needs of these “strangers” in contrast to the blessings we have received, and then consider whether we are able to respond to the need of the moment in a way that illustrates the grace of the gospel. As I see it, it is beyond a doubt that we have in our midst the financial ability as well as the manpower required to take on a sponsorship project. And I want to think that there is plenty of willingness in our midst also.

Years ago church members saw the need for distinctly Christian education in step with the confessions of the church. The Consistory did not appoint a board (or even a steering committee), but the members themselves appointed the necessary people to make work of getting a school off the ground. The same sort of thing happened more recently with the formation of an ARPA board in our midst. In both instances the proclamation of the gospel awakened among members in the congregation the need to take action, be it in relation to education or to politics. I would suggest that a Refugee Aid Committee could arise in similar fashion. It starts with conversation over a coffee, and soon enough, I’m sure, one will see who has appetite and drive and vision for this sort of activity. A bit of a push among the willing and the able, and I’m sure the ball could start rolling. From there on it’s a matter of connecting with the Refugee Committee Coordinator from the Emmanuel Free Reformed Church in Abbotsford (refugee.efrc@msn.com), and the next step should become apparent.

Should we wait for the deacons to take action on this file? No, I don’t think so. I’m aware that the Form for the Ordination of Deacons charges the brothers to “do good to all men” (Book of Praise, pg 627, where the Form quotes the text I mentioned earlier from Galatians 6:10). As it is, the deacons have their hands full with looking after the local needy and activating the congregation to look well after one another. Though the deacons certainly may and perhaps should encourage the congregation to be active in doing good to today’s refugees, we need to note that Paul directed the instruction of Galatians 6:10 to the Galatian Christians themselves, and not to their deacons. In similar way, the Lord places on our path the privilege for any person in the congregation to make work of initiating a good cause.

Our initiating a Refugee Aid Committee would, of course, not fix the problems in the Middle East. It could help a family or three –and that’s wonderful– but the unsettledness currently besetting the Middle East would endure. Politicians may or may not do what they possibly can to promote peace. Yet to cope with the miseries that characterize this broken life, the people of the Middle East need the gospel of redemption in Jesus Christ as much as we do. Middle East Reformed Fellowship (MERF) is instrumental in broadcasting the gospel throughout the Middle East, and as we have opportunity we do well to support this good endeavor also.

Yes, we may look small and insignificant in our little corner of the world. In the gracious providence of our God, however, we’ve received so much, so very, very much in the gospel of Jesus Christ. We’ve received so much too in terms of financial ability and freedom and energy and manpower and willingness to share. On top of all that, the Lord gives us occasion to let our gratitude overflow in a wealth of generosity. Perhaps we’re small, but the Lord gives opportunity. And that’s what counts.