Nothing but your best

Home Blog Posts Nothing but your best 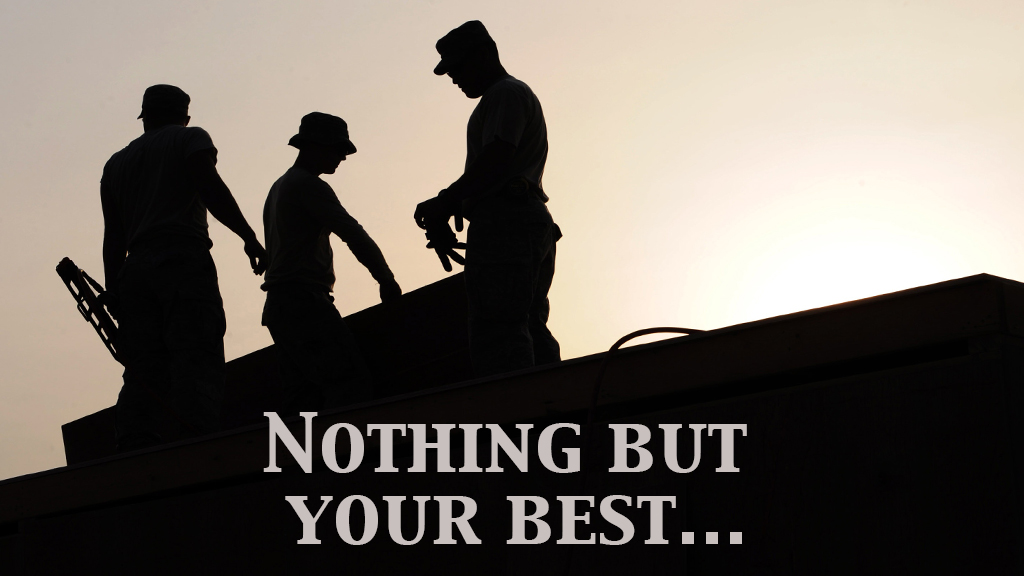 Some time back in May, I think it was, those responsible for organizing the graduation event for the Guido Class of 2016 asked me provide the parents’ address to the students. I take the liberty to share the resulting address via this Bit to Read. The ceremony was held Saturday, October 1.

Mr Principal, Chairman of the Board, Graduating Class of 2016, Parents, honoured guests,

The program introduced me with a title, indicating I am a minister of the Word. Acceptable as that is, I am before all else a parent, and it is in that capacity that I stand before you this afternoon. At your graduation this afternoon, I’d like to share with you the perspective I’ve pressed upon our children over the years.

Today you officially leave the comfort zone of high school and step into the big world outside. You have already experienced, and perhaps still experience, the step to be part exhilarating and part nerve-wracking. That’s why I want you, young fellow Canadians, today to know that you make the step into this big world in an exciting time, with a future before you that’s big with opportunity for each of you ­– and therefore begging your eagerness to engage it.

Consider this: the world into which you step is the sovereign domain of Jesus Christ! His victory over sin and Satan on the cross, his literal resurrection from the dead on Easter Sunday, and his physical ascension into heaven seven weeks later saw him enthroned –as Paul puts it– “in the heavenly places, far above all rule and authority and power and dominion, and above every name that is named” (Eph 1:21) – be that name Justin Trudeau, Mark Zuckerberg, Richard Branson, Elon Musk, whoever; Christ Jesus is King! Since I’m speaking today to young Canadians, let me say: he’s King of Canada!

Further, you are brothers & sisters to this King of kings, for you are sons and daughters with him of his heavenly Father, heirs with him to all that’s his – including all of North America, yes, and Europe and Asia and Africa too; the world is yours. Your position as God’s children and so heirs with Jesus Christ was signified and sealed to you in your baptism, its implications drawn out for you in church and in catechism classes over the span of your years, its consequences taught to you through the grades of primary school and especially in the hallowed corridors of Guido deBres Christian High School –thank you, teachers, for your diligent work!– and especially by your parents in your homes. Some of you have already publicly responded to the claim of Canada’s Lord upon your lives through profession of faith; others of you are preparing to make that good profession in the months ahead; and perhaps still others of you are not (yet) at that point where you wish to publicly commit to the service of Canada’s eternal King. For all of you this much counts: your identity has been established, without your permission and without your contribution – so that you are royalty in the house of Jesus Christ as truly as Prince Harry is royalty in the House of Windsor (whether he likes it so or not). Canada’s King is your senior brother!

Like you, I’m very aware that many citizens of our nation refuse to acknowledge Jesus’ sovereignty and lordship over the True North. That politicians, bus drivers, journalists, welders, professors, salesmen and countless others live in denial of Jesus’ kingship does not, of course, change the facts – as each Canadian will one day most certainly admit when they meet the exalted Christ face to face. You, meanwhile, are ahead of the pack; the Lord told you of his lordship, has drawn out for you its consequences, and granted you the conviction that what you’ve been told is the truth of the matter – despite the trending popular opinion.

Well now, with Christ as King of Canada, and you among the privileged in the land who recognize his lordship and are from childhood even heirs with him to the whole world and all that’s in it, you may look into your future with boundless optimism. There is no reason for you to cower in a corner in the face of opposition within Canada to Christ’s lordship. Today’s communications technology, transportation technology, shifting patterns in social structures and acceptable customs – all are occurring under Jesus’ watch, and so these developments are for you to use in your service to the King of the world. It’s really true: as princes and princesses with King Jesus, sons and daughters together of the Father of our Lord Jesus Christ, heirs with Christ of all God created, you may with eagerness grab the opportunities the present decade of the 21st century puts before you. Your link to the King of Canada spells opportunity, big-time! Make the most of it!

Nothing but your best

Here’s the hitch I’m seeing. I’ve had a fair bit to do with some of you in the last few years, and kept an eye on Young People in general. I’ve observed how you shuffle through life, as if the opportunities life offered you were boring, or not worth the effort, or less than what you felt you were entitled to. Frankly, I can understand how someone who sees himself as a mere cog in the enormous machine of society would shuffle from job to job, from activity to activity, from moment to moment as if he has no purpose, no goal; a tiny cog seems so insignificant in the big picture of things. But you’re not mere cogs; you are sons and daughters of Canada’s Creator, of God Most High, and you’re brothers & sisters of his only Son who has been exalted as Canada’s King and the world’s Lord! Shuffle to work on Monday – or to university, as the case might be? Slouch your way through the daily task the King of Canada has given you in his dominion? Yawn through your hours in church or Bible study or preconfession class while the King speaks to you words of instruction and admonition and encouragement and rebuke? Son/daughter, in the kingdom of God, nothing but your best! That perspective drove the apostle Paul: “Brothers,” he wrote, “one thing I do: forgetting what lies behind and straining forward to what lies ahead, I press on toward the goal for the prize of the upward call of God in Christ Jesus” (Phil 3:14). Christ is risen, Christ is King: Paul knows and you know that this province, this country, this world is his kingdom; always was, always will be. Since this world is his world, this land is his kingdom, every factory and desk and car and moment lies under his feet –every day and every thing within his kingdom– it’s for you to press on in the privileged service of this King! Remember it, repeat it, remind each other of it: in the kingdom of God nothing but your best! And all the world is his kingdom!

So what do I –and all parents– expect of each of you in the days and years ahead? You got it; from you who confess Christ’s kingship over this world, from you who know yourselves to be princes and princesses with the King of Canada, we expect nothing but your best. No shuffling, no slouched-down attitude, nothing half-hearted, nothing of we-can-play-today-and-get-serious-tomorrow; what we expect is eagerness as you give all your youthful energy and drive into the privileged service of your Savior and your Lord, we expect enthusiasm as you grab hold of the opportunities Jesus the King lays before your feet in this 21st century, and we expect you to stretch yourselves to the limit to advance his glory and the benefit of your fellow Canadians and fellow earthlings.

Under Christ’s watch big changes are afoot in our country and in our culture. You need not be intimidated! You are kings with Christ, and this land –his land– is your land! Today is an exciting time to live under this King!

My young brothers & sisters in God the Father, and my fellow princes & princesses under Jesus the King: God bless you richly as you work in the coming years from this perspective in your daily callings. The King will not fail, no matter how he leads Canada; his kingdom is forever.